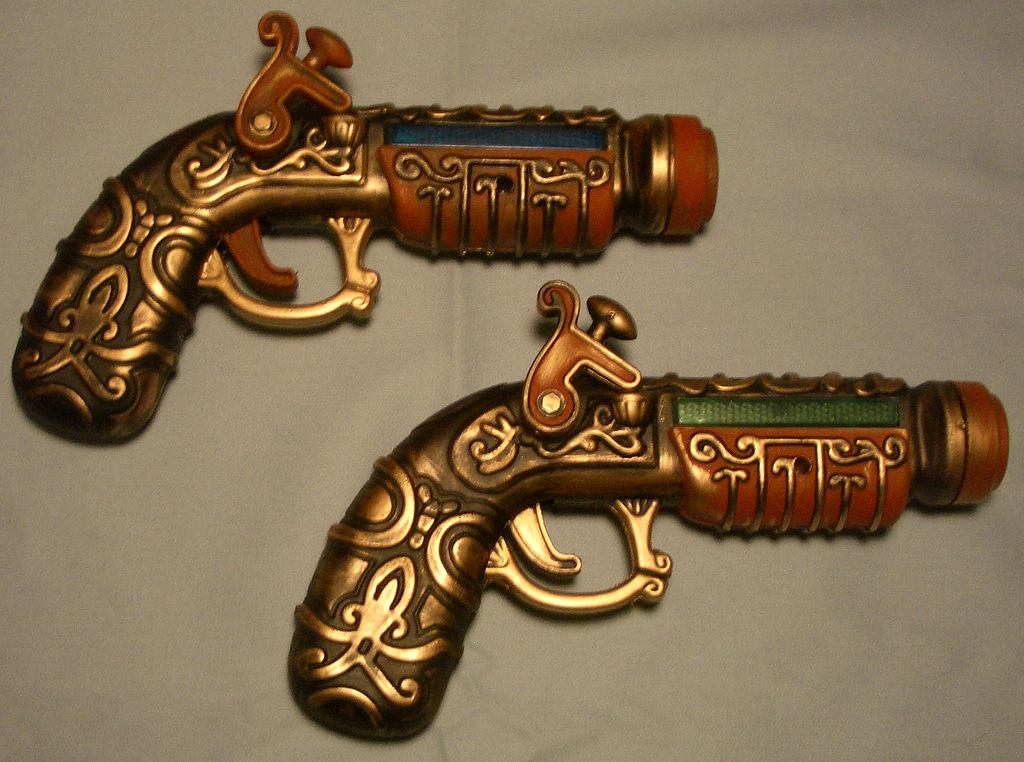 Steampunk Weapons, Accessories With a Bang

Accessorizing a Steampunk outfit doesn’t always mean putting on a pair of Copper Watch Gear Earrings. Sometimes it means locking and loading. Weapons are as much a part of Steampunk culture as goggles or top hats, and epitomize the Steampunk DIY spirit.

Steampunk weapons seem to favor guns because in the late 19th century firearms and their mass production were the hot new technology. To give some historical context Victorian Era weapons had greatly improved over clumsy muskets and arquebus’. The flintlock pistol was extremely widespread (among gentlemen and ladies alike), and the Colt Peacemaker was cutting edge with its six shot chamber. Firearms were more readily available, easier to use than ever before, and coming in a variety of new aesthetically pleasing designs for those who could afford it; and so their popularity began to grow.

Aside from their obvious uses in The British Armed Forces, guns became a symbol of status. Most self respecting households had some sort of weapon, whether it was an antique heirloom mounted above a fireplace, or a modern and fully loaded gun kept in a desk drawer. Knowing how to shoot was considered a mark of good breeding. Hunting was a popular sport, as was shooting clay pigeons. And though it was generally deemed unlady-like for a woman to pick up a rifle, many women did in fact practice the sport during leisure time in the country. The practice of dueling was common in both England and The United States, and prior to the more public accessibility of firearms disputes were settled through sword fights. And though most of the time a duel was about demanding satisfaction rather than actually killing someone, one had to be prepared with a pair of well kept dueling pistols.

Steampunk usually falls in the Victorian Era (loosely 1837-1901) and this includes The American Old West where weapons were a way of life. Guns have come to define our notion of The Old West where a rifle, or a pistol was the difference between survival and certain death. The advance of weaponry (particularly the Peacemaker) and the general lawlessness of the new western territories made the residents literally “gun happy.” To introduce Steampunk into that context we get even more of an advance in technology leading to some “gun happy” cosplayers.

Steampunk being a realm of “what if…” means Sci-fi is free to broaden the scope of what these weapons could be. Whereas buckshot and grapeshot with a hefty dose of gunpowder was what an average gunslinger had to look forward to, a Steampunk gun can harness steam to create a highly powered ray gun. Or for the more “nostalgic” weapons master bullets can still find their mark with ultra precise targeting technology. And since such sophisticated weaponry has no real need for function (we highly discourage the construction of death rays) an arsenal of weapons can become stylized for the sake of fashion. Weapons can be as broad or as specific as the character carrying them, and because weapons are usually a DIY venture they’re infinitely customizable.

The most popular practice is taking Nerf rifles and repurposing them into futuristic Steampunk creations. Other cosplayers choose to go more personal with their weapon and literally make themselves one with them. Whatever method you choose you’ll never go wrong as long as you remember that as long as it looks cool it’s legit!