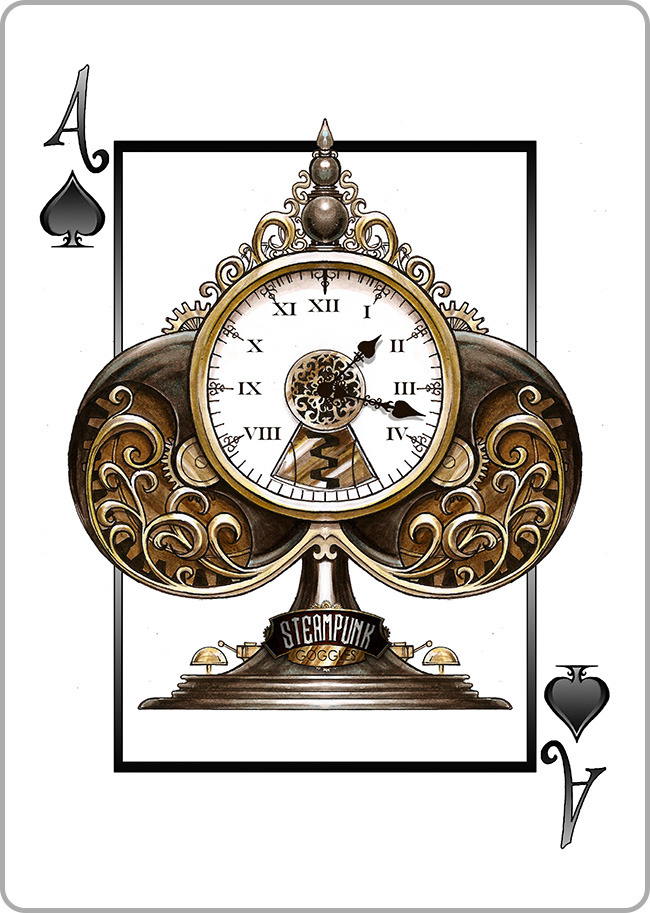 Steampunk accessories don’t always have to sit around your neck or in your hair, sometimes they can sit in your pocket until it’s time to shuffle them! Playing cards have a long history and a rich tradition as both a source of entertainment and mini works of art with their own lore. A deck of cards has endless possibilities, gaming, magic tricks, fortune telling, collector’s items, fashion, the list goes on and on. Over at our sister-site, SteampunkGoggles.com we’ve been hard at work developing a deck of Bicycle branded Steampunk playing cards with a campaign on Kickstarter. In order for this deck to come to life the project must be fully funded before January 10th. With three days left to go we have been spreading the word about this beautifully hand-illustrated deck of cards so we can hit our goal and everyone can take advantage of the rewards and add-ons that come along with pledging to the campaign.

See The Rest of This Steampunk Deck Here

A brief Steampunk playing cards review of how it all came about: SteampunkGoggles.com searches far and wide to find the best goggle artists and bring their work to the Steampunk community. To pay tribute to those artists and the community-at-large founder Dennis Consorte (also the brains behind SteampunkJewelry.com) came up with an idea for a deck of hand drawn Steampunk playing cards featuring the real goggles of our artists on each of the face characters.

Dennis wanted each suit in the deck to  also represent a different Steampunk archetype so that Steampunk fans of all kinds could find something to love and connect to.  The four archetypes (conceived and consulted over by yours truly!) are The Industrials (Spades), The Aviators (Clubs), The Lovers and Rogues (Hearts), and The Gliterati (Diamonds). Each face card would receive a custom back story and a pair of goggles that best fit their personality.

Over the course of three weeks Steampunk Goggles, The Deck has been gaining attention on message boards, social media, and even the local press. Part of the appeal has been that backers are encouraged to take part in the discussion as to how to make the deck appealing and functional. Lots of feedback has poured in from Steampunk fans, card enthusiasts, magicians, and art lovers, creating a truly communal experience. The rewards and add-ons, including dice, coins, and game mats, score trackers and table toppers in partnership with Break From Reality Games, have also generated buzz. Some backers have even taken advantage of being able to part of the deck by pledging amounts to have their face drawn as a face card.

The artwork, however, has played a key role in the deck’s success so far. Each card features the original artwork of visual artist Mike Lees. Lees’ minimal use of computer rendering and coloring was true to the DIY Steampunk spirit and perfect for this project. Under the creative direction of Dennis Lees’ artwork has been astounding both the backers and the creative team since day one. From concept to finished card Mike’s ability to capture an idea on paper and make it look clean, full of life, and just plain cool makes this a truly unique deck not found anywhere else.

Steampunk Goggles, The Deck is in the homestretch of its campaign but you can still be a part of it and help spread the word before the deadline on January 10th!